Not on “Bagna Càuda” alone 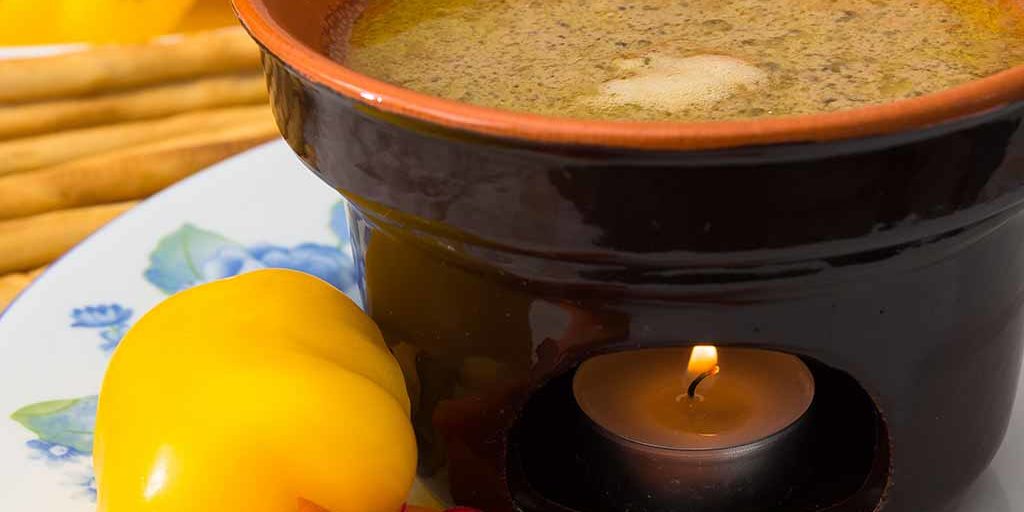 People say that in Monferrato the food is better than in the rest of Piedmont. Maybe that’s why this region, for historical reasons, has always been the crossroads of several commercial routes linking Piedmont, Liguria and the Po Valley, so that the cookery culture took the best from the mix of Ligurian, Lombard and Emilian flavours and recipes.  Added to this is the influence of the morphology of this region (part of a valley with a strong “horticultural vocation”), not to mention the social stratifications which means that thousands of humble craft guilds will all prepare food in a different way, be they carters, livestock-dealers or cattlemen. This is a cuisine based on tripe, on legs of pork, on chickpeas with calf’s head, on boiled meat, it is the cuisine which invented the famous carpioni: meat, eggs, courgettes, but also fresh-water fish so abundant in Monferrato, which are fried and soused in vinegar and sage. A fine and unique way of preserving food for long periods, especially in summertime.

Another culinary must is salame “cotto” [cooked salami] made of pork cutting and lard which was the typically served in inns, while the characteristic mason’s dish was polenta with a sauce called bruss, a cream made of refermented scraps of cheese. Polenta was the staple food of the poor, but their bagne [sauces] were always imaginative: onion, garlic and fragrant herbs, with a base of parsley as in bagnèt verd [a very tasty green sauce], or made from soup, bread, vinegar and shallot as the bagna del pòvr’òm [the sauce of the poor man] or the cugnà, a grape sauce obtained by cooking the must for at least ten hours together with pears, figs, nuts and hazelnuts. And it was this very humble culinary culture which led to the main Piedmontese sauce: Bagna Càuda, which was born in medieval Monferrato by melting together garlic, salted anchovies imported by the people of the Languedoc from Spain, and oil from the neighbouring Liguria, in big copper pots.

The collective gesture of dipping a piece of bread or vegetable in this sauce made it a ritual, a sort of pagan, seasonal thanksgiving to Nature and its powers. The Bagna càuda is something more than a “Typical sauce of Piedmont with vegetables” (the poor definition you can often find on an English version menu). We have to do justice to what is truly the catalyst of an esoteric rite, marrying the anchovy, the oil and the garlic in the name of popular festivals taking place during vintage time. Needless to say, the vintage festivals here in Nizza are not like those anywhere else. By adding just one very special ingredient – the cardo gobbo di Nizza [a Piedmontese variety of edible thistle] – the locals added their own interpretation to this exotic dish. The alluvial soils of the Belbo creek, the experience of knowing when the stems of thistles have to be folded and how to cover them with earth so that they become white, tender and crisp thanks to the chill, are the ingredients that make this thistle one of the symbols of Piedmontese cooking and an ideal partner to Bagna càuda.

It is not by chance that Nizza is the home of the “Confraternita della Bagna Càuda”: its Grand Master and founder is Arturo Bersano and we owe him the most poetic and “philologically” correct recipe for Bagna Càuda. «…A rite not to be neglected, as any event which unites first the crowd and then everyone with Nature», according to his note written at the foot of the recipe in 1962. Does this make you want to stay longer in Nizza Monferrato? Do you really want to miss the unique delicacies of game, mushrooms, truffles, the “green Easter pie” made with wild herbs, the local goat’s milk cheese? And what about the agnolotti [pasta filled with seasonal ingredients]? Can you really miss the casserole of veal shanks, the mixed boiled meat, cooked in four different pans? Yes, you could, but you’d be doing your palate a disservice… But you absolutely cannot leave the town without tasting one of the humblest and at the same time delightful dishes of this country cuisine: the belecàuda, a kind of focaccia made with chickpea flour, salt, water and rosemary. Its ancient origin is Ligurian-Piedmontese, but just in Nizza it is called so and just in Nizza it has such an unforgivable fragrante.